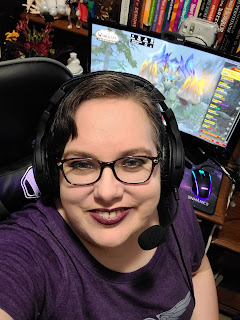 Carrie Fulk Vaughn is a licensed massage therapist, certified pharmacy technician, author, feminist and gamer full of honey butter chips and Dr Pepper. She pens science fiction, urban fantasy, horror and steampunk with a side of romance. Her characters are straight, LGBTQIA and shades not on the spectrum.

She has been published in both fiction and non-fiction publications through Dark Moon Press, Llewellyn, Breathless Press, Jupiter Gardens Press and Circlet.

Carrie is the former Editor-in-Chief for Dames & Dragons magazine, a geek publication that released its first issue in August 2015 and retired in 2018. She also crafts and cosplays under Marshmalohgrrl Artistry. She has also served as the President of the Central Ohio chapter of the International Costumer's Guild from 2018 to 2020.

Through the month of November, she can be found in local coffee houses, over caffeinated and armed with her trusty laptop as she strives to bang out 50,000 words in 30 days for National Novel Writer’s Month. She served as a Municipal Liaison for three years in Findlay, Ohio and another four years for Columbus, Ohio. Although she is no longer an ML, she's still passionate about the project.

Carrie has been a reviewer for the Caffeine Crew via Bored Gaming. She was the head of the Yeah Books! Blog. She is also a former D20 Girl and was both a writer and blogger for the D20 Girls magazine. She has served as assistant game head for MARCON 50 and runs tabletop gaming for local conventions. She was the costuming head for Marcon in 2019. She is part of Team Japanime for Japanime Games. Adding to the list of hobbies and accomplishments, Carrie is also part of Ruin Gaming and is a streamer on Twitch.

You used to write with the pen name C.V. Madison. How did you get that name?

My given name was taken by an established Science Fiction author, so I used my first and last initial and the last name of my dear friend Krystel Madison. She urged me to get back into writing after I’d given it up for several years. She was my first critique partner and a huge support when I got my feet back under me again. Later I simply added my maiden name and viola!

If you couldn't be a writer, what would your dream profession be?

I have three passions in life: writing, coffee and massage therapy. I already work in my ideal profession. I am a licensed massage therapist and I love every minute of what I do. I spent three years working in a coffee house while I went to school for massage. I miss getting to the coffee house before everyone showed up and brewing all the coffee for the day. I miss pulling shots of espresso and making latte art. Writing has been a passion for years and I don’t look to give it up any time soon.

What is the most difficult thing for you to write?

I have a difficult time writing sex scenes, as silly as that sounds. It takes a lot of effort and extra help from crit partners and editors to get the scene just right. Heterosexual scenes are more difficult than gay or lesbian scenes.

How much research do you do for the things you write?

It depends on the subject. If it were about the three things I know well, I wouldn't need to research. For the things I don’t know well, I do research. A steampunk story I wrote involved a character working on a steam engine. I know nothing about steam engines, so I employed Google-fu and asked questions of people on Twitter.

What is your favorite genre to write?

What are your hobbies?

I collect ball joint dolls. My first doll was a Resinsoul Pixiu and was to be the base to mod for a demon version of my character Baby. My second doll was a Resinsoul Gang. I’ve made him into my character Makiros. I am also into cosplay. I’ve done Blood Seras Victoria from Hellsing, Reno and Lucrecia from Final Fantasy VII and Riku from Kingdom Hearts. I also have a World of Warcraft habit. It’s more a hobby than just a game. I've also gotten into Decora.

I haven't posted in a long while, but I thought perhaps with all the craziness going on in 2020 (which I thought was going to be MY YEAR) I should post that I am a certified Reiki master and can do distance sessions with anyone interested.  I can also do tarot card pulls for anyone interested as well. If you will donate to my Ko-fi I will pull a tarot card and post your results on my page. I am still writing. Hopefully I will have some new work published next year.
Read more