The Return of Hopalong

- August 10, 2010
Strangely enough, it's been over a month since my last post about Cassidy!  She's doing pretty well.  We've actually worked her down off of the prednisilone and she is completely off of it now.  She hasn't had any tramadol for a long time and she's actually getting around pretty well.  There is less of a hunch in her back most days, but we can tell when she's getting painful based on how high the hunch is in her back.  We've been continuing to work with her back legs and actually get her flexibility back and we've been trying to get her to actually play ball and tug of war like she did before.  I don't think I'll ever see a day when she'll be able to run after a frisbee like she did before, but maybe someday I'll actually be able to take her for a walk with me and she won't get tired after 30 feet.
I took a couple new videos that I'll share.  She's actually getting a lot more active recently and it makes me happy to see her acting like herself again at least a little bit more.  She's been actually running after her bath like she used to and she's rolling to dry herself off, something she hasn't been able to do before.  It's encouraging to say the least.

At least she's been moving a lot more and doing things with the family.  She wants up on the sofa so bad she can't stand it, but with her occasional potty accidents still happening when she's painful, we haven't been letting her on the sofa.  She's actually been better about it since the pustules on her vulva have cleared.  We've been wiping her with a baby wipe to be sure she's getting clean. 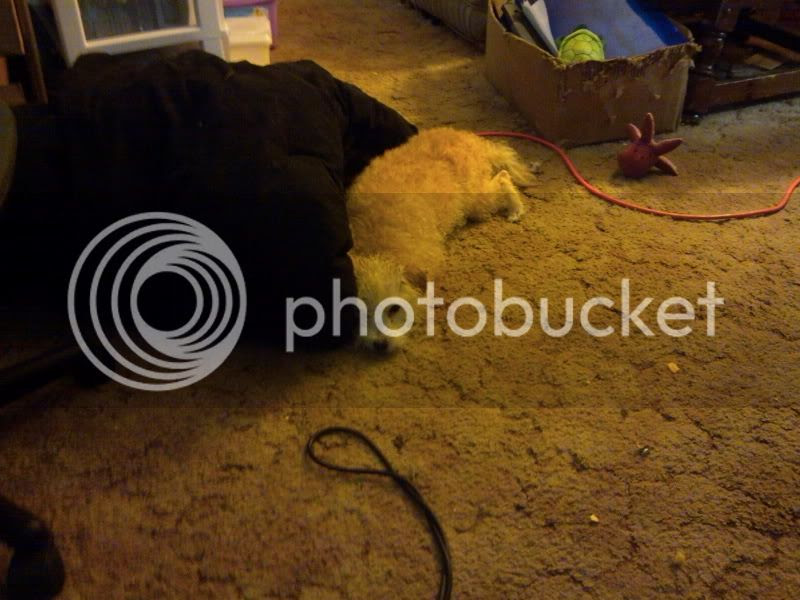 Poor thing looks like she lost her last friend.

By all accounts, Cassidy is doing well.  She's off all of her drugs and although she's still Hopalong, she's not paralyzed and she's still making little improvements here and there.  I don't think I'll ever get back the dog that was able to jump up the windows and go up steps without a ramp again, but she's still trying.  She actually made it up one step tonight on her own and, if there had been a board behind the step, she might just have been able to right herself and pull herself up the second one.  I'm paranoid to have her risk it, though, so I'll be putting in a ramp so she can get up and down a little bit easier to use the bathroom on her own.  Any apartment we get into is going to have to have a ramp on it so we can get her in and out easier.  It's all little adjustments and things we'll have to work on between now and the move.
So that's my update.  All's well!