Twilight Over Moldavia by Stephanie Burkhart
My rating: 3 of 5 stars

Witches and werewolves and vampires, oh my! Twilight over Moldavia is the second book in a series of paranormal romance. I have to say I was very entertained. The story starts a little slow, but once it gets rolling, it's an entertaining read. The main character, Stefan, is a well groomed leader for his country: remarkably calm and reserved. He is betrothed to Caroline who steps in to fill her sister's shoes after her untimely death. The unification of Romania is a large piece of the story and the marriage of the pair will create the unity they search for. The story weaves in Romanian history and touches of the rich culture and is reminiscent in feel to Malificent. The author spends time fleshing out the scenery as they pair tour over the country.

As much as I liked this book, the “tour the country with my bride to be and we fall in love” trope was easy to call despite their falling in love being a gradual progression throughout the book. Stefan and Caroline suit one another well and seem to shore one another's weaknesses. It's a good match.

I'm tempted to pick up the first book in the series so I can learn a little more history behind a few of the elements touched on in remembrance. I think it would bring the story alive a bit more for me.

Transgender people are PEOPLE and we have a responsibility to them

I posted an interview today over at Yeah Books. It really hit me hard as I was reading through the interview document. I need to start including a trigger warning in my interviews because this one bottomed me out to a sobbing mess on the floor. Literally. I'm not making this up. It took me almost an hour to get myself back together enough to start typing this post. I'm sure it will go through more edits before I finally post it because I'm typing through tears and hyperventilation. If you are not sensitive to the topic of suicide, particularly Transgender persons, please go to Yeah Books and read the interview that posted today.

The interview began normally. Talking about general conversational topics. Then it turned with the question "Did you meet any interesting people during your writing process" or something similar. The author begins on a retelling of Transgender suicides beginning with Leelah Alcorn and progressing through almost a dozen others.

This. shit. bothers. me. And why? Because these beautiful lives have been snuffed out because they couldn't see any other way out. They couldn't see the light at the end of the tunnel. And you know why? Because there isn't one for them. Once you graduate high school, it doesn't get as better for them as it gets for gay people. They deal with crotch grabbing (which IS sexual assault) at PRIDE celebrations. They have worries of being killed because of the bogus "trans panic" excuse that still holds up in court. As a matter of fact, trans panic was legal in all fifty states until 2014. California was the first state to step to the plate. California is the ONLY STATE to step up to the plate. Trans people are assaulted verbally as they walk down the street and have to resort to stabbing people with scissors because they are being attacked and who goes to jail? Not the people who started the fight. It's the Trans woman.

Why are these people committing suicide? Because we, as a culture, refuse to see the beauty in diversity. We refuse to accept that someone may not fit into the nice, neat little boxes society has told us we have to fit into. We refuse to see that we are ACTIVELY HARMING others mental wellbeing by insisting they prescribe to an ideal that makes the world at large comfortable.

It's bullshit. This has to stop. And it stops here. And hopefully with you. PLEASE. If you have a way, donate to the two places that could have helped Leelah and other Trans youth like her.

These photos were from Midorifest and was my first D20 photo. How fabulous do we all look?? 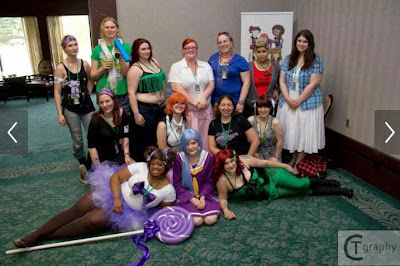 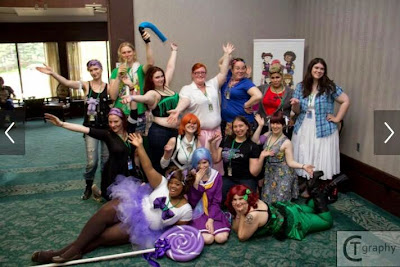 The D20 Girls were representing from five states for Midorifest. That's an awesome turnout, in my not so humble opinion. Not to mention we had some AMAZING cosplayers and every one of the girls was fantastic.

I was asked today on Twitter what my blackberry sangria recipe was and I thought, what the hell! I'll share on the blog, too!

I use a bottle of red wine, generally something with matching notes of citrus, blackberry and vanilla. For tonight's Sangria, I used Gato Negro Cabernet Merlot. Sweet, but not too sweet. It helps balance the homemade blackberry syrup. It's hard as hell to find pure cranberry juice, so in a pinch I used a cranberry blackberry juice cocktail. The recipe is WAY better with pure cranberry juice. And, because it's delicious, I add in a little Tuaca. Mmmm.

To make blackberry syrup, you'll need two pints of blackberries. Put them in a food processor or blender and add a little water to blend them together. Run the berry pulp through a sieve using a wooden spoon. Discard the seeds. Add a cup and a quarter white sugar and bring to a boil. Allow to cool. You can substitute whatever blackberry syrup you'd like instead. I believe Carabba's uses Monin in their blackberry sangria.

Put all liquids together and stir well. Add fruit. Let chill in the fridge overnight. Serve over ice.

I survived Marcon! The gaming department received a lot of really great compliments. One of the participants said the gaming department was the most organized it had been in over 12 years. The people who came down to play requested more Pathfinder next year. The Munchkin and Zombie Dice games went over really well. We have ideas on improving the space constraints next year.

I received invites from both the Vampire LARP and Amtgard troupes in Columbus to come check out their events. I didn't have time to play with them at all during the weekend. I couldn't even attend the Bodily Expression LARP even though the DJ was freaking AMAZING. I'm not sure who he was, my friend Mystie did. I want him back next year. He's incredible.

I met a lot of really awesome D20 girls, especially a new girl Darla and Jennacide, whom I've been talking with for quite awhile but had never met. I worked with Kate, Mikki and Suzi at MidoriFest.

I plan on returning next year, although I will space myself out better and make sure I know exactly what my responsibilities are. One of my panels was completely railroaded by the "senior moderator" for Marcon. Whatever that means. He took over my panel and it wasn't even discussing what it was I'd planned to talk about.

The writing panel was kind of a joke. I wasn't overly thrilled and was talked over by the other panelists. No one had an outline of what we're supposed to talk about. I don't know if that's the moderator's responsibilities or what.

I really enjoyed doing my street fashion presentation with Deja Sweets. I'm considering getting involved with the Lolita community. I have a dress I need to modify. I wanted to attend the Lolita tea party, but I was in another panel.

Less panels next year. More doing things I wanna do. Like dance. And have tea with Loli girls.

I will have a review coming up on the Caffeine Crew website and my friend Mystie will have a review on the D20 Girls blog and magazine. If you missed Marcon, you really did miss out on something spectacular.
at May 13, 2015 No comments:

Story time since it's on my mind and I wanted to share and ask a little extra patience.  May 20th. Mary and I are at a local garden shop...