- July 04, 2016
Happy 4th of July to all of us snot-nosed American brats who thumbed their nose at Britain and decided to make this beautiful mess we call a country. For as flawed as so many things are, they're still better than the situations other people in my situation have in their home country, so I'm going to celebrate.

I think what I may be doing, however, is sacrilegious.

My friend is absolutely in love with afternoon tea. Most specifically, cream tea. She goes to a local place called Mozarts for tea once in a blue moon and told me their scones with clotted cream are absolutely to die for. As a fundraiser for Marcon, we did a cream tea at The Soldiery. I offered to make two bite scones and clotted cream with strawberry preserves. One of our staffers is an employee at Zen Cha and served four different teas. My favorite was Earl Grey, no surprise there. It paired very well with my dish.

The moment everyone put the first bite of the scones and clotted cream with strawberry preserves, there was a brief pause before a very delighted "Mmmm" passed their lips around the mouthful. I have never seen anyone savour something as much as those tea participants. Two bite scones became eight bite scones. Everyone asked for seconds, but I had only made enough clotted cream for 10 people.

So, to celebrate Independence Day while I silently curse the dark and the fire hazards it brings with it, I will be having a late cream tea. Want the recipe? I'll share.

The first item takes the longest. Not necessarily for active watch time, but for the longest cook and cool time. The recipe I found calls for a quart of clotted cream, but for a group of four of us, a pint is plenty. The clotted cream should be used sparingly as it's incredibly rich with a nice, light nutty flavor. 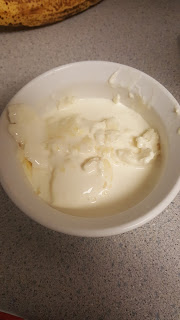 On a double boiler over medium heat, add the heavy cream. Slowly bring the temperature up to 180-200 degrees. Hold the temperature at 190ish for 45 minutes to an hour. Once it's finished its time, place the pan and all in the fridge overnight.

The next morning you can skim off the yellow skin on the top and layer in a bowl. That's your clotted cream. You can use the remaining cream in cooking recipes. It's now, essentially low fat. 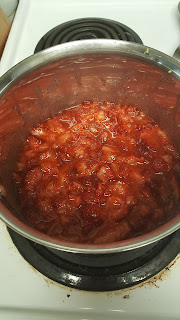 I made my preserves next so they had a chance to cool. The recipe is dead simple.

1 quart strawberries, hulled and quartered
2 cups sugar
The juice from 1 lemon (2-3 T)
The zest from 1 lemon

Add all ingredients to a pot. Mash strawberries with a potato masher until all ingredients are mixed. Bring to a boil, then reduce and simmer until the juice is thickened. Put in a jar. Can be refrigerated or frozen. Also makes awesome ice cream topping. It's pretty tart, so you can leave out a little of the lemon juice and zest if you'd like. At least 2 T of lemon juice and 1 teaspoon of zest is necessary. Feel free to experiment. This is just the recipe my great-great grandmother used. 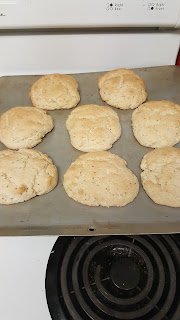 For the scones, I cheat and use Bisquick baking mix.

Using the heavy cream from the clotted cream, you can mix one to one with skim milk to make half and half for the recipe, which is what I did for the non-vegan variety.

Heat oven to 400.
Mix dry ingredients together until moistened. Drop by 1/4 cupfuls onto cookie sheet. Place in freezer 5 minutes.
In a small bowl, beat egg yolk and 1 tablespoon half and half. Brush over scones. Sprinkle with remaining sugar.
Bake 12 minutes until golden. Move to cooling rack. Serve warm. 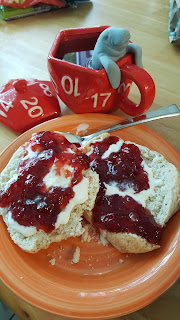 It's delicious. I promise.