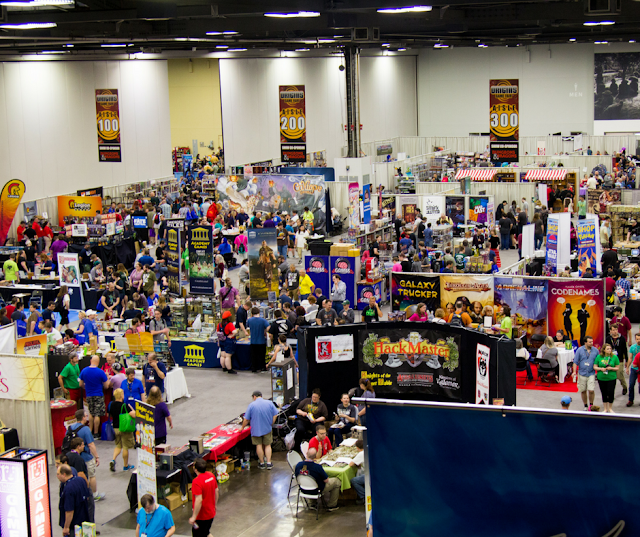 Origins Game Fair welcomed thousands of guests from all over the world to the Greater Columbus Convention Center, June 14-18. This annual convention brings in gaming companies, authors, artists, and more for five days of events and family-fun.

Origins 2017 featured over 7,000 events, a 24 percent increase in events from 2016. The show offered major tournament play, with the return of the WizKids World Championships, national tournaments for IELLO, Catan Studios, Konami, and the Catalysts Battletech Open. "Mayfair Games would like to thank everyone who attended Origins this year,” said Larry Roznai, President and CEO of Mayfair Games. “A special thanks goes out to all the fans who stopped by for an event, a demo, or to pick up the latest hot game! It was an amazing show with a double digit increase in sales over last year, non-stop booth demos, and overwhelming participation in the ever-popular Ribbon Quest program. We look forward to seeing everyone again next year!"

“Origins was a blast this year,” said Trevor Kidd, Manager of Dungeons & Dragons Global Brand Team. “We sat over 1,700 players at tables featuring content linked to the upcoming Dungeons & Dragons adventure Tomb of Annihilation, had 35 tables of adventurers, streamed live interviews, and gave away tons of swag. We’re definitely excited to start planning for next year.”

Attendance hit a record high this year. Unique badges rose nearly 10 percent, from 15,480 in 2016 to 17,001 in 2017. Turnstile attendance increased just over 12 percent, with a count of 52,561 in 2016 to 58,958 in 2017—showing an upsurge in attendees returning to the show each day. Origins continues to see growth while maintaining it’s relaxed, family-friendly vibe. Every year, the show expands its range in entertainment, offering events varying from fandoms to award ceremonies. It’s a convention that is welcoming, personable, and takes pride in its inclusivity.

“I am very happy with how well Origins went this year," said John Ward, Executive Director of GAMA. "We couldn't have done it without the support of our sponsors and show co-sponsor Dungeons & Dragons, our exhibitors, volunteers, and Game Masters! We especially want to thank the awesome attendees who come and support Origins every year.”

Origins Game Fair 2018 is scheduled to be held June 13-17 at the Greater Columbus Convention Center. Hotel blocks with group rates will open for reservations at the beginning of September 2017. Learn more about Origins at www.originsgamesfair.com

Origins Game Fair is one of North America’s most prominent annual gaming conventions. It is run by The Game Manufacturers Association (GAMA). Origins serves the gaming industry in general, including miniatures gaming, board games, trading card games, LARPS, and role-playing games.