Since it's launch at the end of September, I have pretty much been no-lifing New World. The premise is the ship you are aboard for a mission to find a mystery item is shipwrecked. You wash up on the shores of a new island where you must now make your home: Aternum.

Everyone on Aternum is immortal. And, as part of the storyline, things get more complicated for your character. (No spoilers here! Come play the game!)

I have been playing pretty much every day for the last two weeks (Since September 28th when it launched) and because my new job decided they couldn't bring me in for training because my background check is taking abnormally long for whatever reason, I've had a lot of time to kill.

My favorite thing about this game is you can learn every weapon in the game on the same character. You can learn every profession on the same character. You can PVP and PVE with very small changes. You can spec to heal and have a second weapon at the ready for higher damage. I started with sword and shield and heal staff and went to heal staff and fire staff/ ice gauntlet. Respecing uses one of the game's two currencies, Azoth, and takes just a few minutes before your run. All characters can wear light, medium or heavy armor with bonuses for each class to wear specific armor. You can change specs on your armor bonuses with special items. And on top of all that, there is large scale open world PVP.

As part of the game, you overtake territories for your company (New World's version of a guild). That company's governor is responsible for upkeep and upgrades to the town. Once those objectives are set, players can complete job quests from a job board to fill the progress bar. Once the bar is filled, the upgrade happens and you have access to higher grade crafts.

Player housing is available. You can decorate it with things you craft yourself. AND you can have a dog for your front porch! Or in front of the fire. Whatever you choose.

The best part about this game is how absolutely stunningly gorgeous the world is. You travel through beaches and lush jungles and travel the terrain all on foot. No mounts. Your gear can be customized with skins so you don't look like a dirty hobo while you're slapping on whatever armor is an upgrade for your character. (Without the skin my character looks like a serious mess. Ugh.)

I mean, look at this sunrise! (Click the image to make it larger. I currently have it set as my desktop background.) 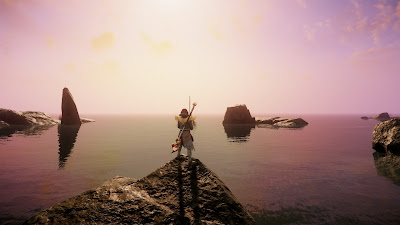 And the best part of all is: once you pick up your copy of the game, it's yours. You can play as much as you want online in an MMO without a subscription. That's right.

If you want to play New World, I have an affiliate link you can click to get your copy direct from the publisher, Amazon Games. You get an awesome game and a rich gaming experience and I get a little extra bonus for sharing this content with you. Please click the link and image below to pick up your copy of the game.

I play on the Ys server in North America East. I run with my guild in Ruin Gaming and you are more than welcome to join the Marauder faction and join one of our companies. Currently we're rolling with ten companies for all of our members and organizing through the Ruin Discord community (4k members strong in multiple games from World of Warcraft to Star Wars the Old Republic, Elder Scrolls Online, Final Fantasy XIV, Conan Exiles, Valheim ... the list goes on and on.)

Rather you want to come into the world and do nothing but craft and farm or if you want to explore the dungeons and player versus environment content or if you're a junkie for player versus player, you have a place in Aternum and a home with Ruin. Hell, be a multi-user like me. I do a little bit of everything.

A few downsides to the game: some of the players in the PVP environment are a little toxic. Or a lot toxic. They like to run their mouths when they win and bitch and complain when they lose. There are some players that are inappropriate or rude. And there are some people who exist only to troll new users. There are bugs that need to be fixed and some of the item drops need to be retooled a little bit. There are exploits to work out and the queue times for the first week were absolute HELL. 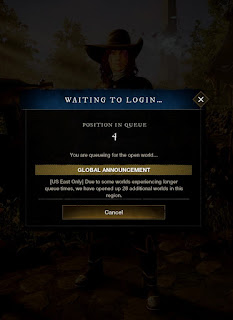 I spent five hours one day in queue just to get a time out error when it tried to connect me and I had to wait another four hours to get in to play. THANKFULLY they've fixed that problem and are allowing new characters to come in and play on our server. They may lock that down again at some point. And if you roll around questing while PVP flagged, some level 60 is going to run out and gank you at level 15 like a jerk. (Which is why I don't flag unless I'm looking to actively PVP someone.)

In short, come play with me. This game is awesome and I really can't explain how until you've gone through the game and just seen the beauty of this world Amazon has created. And they're not done. There's more map I explored in closed beta that isn't open now. So there's going to be more content for us to play through once we've hit end game.

Buy New World. Join NA EAST-YS and become a Marauder. Comment in faction chat you want to join Ruin. You'll find an awesome community of people who will help you level and get through all those tough patches where you just can't pull it off yourself. Like the boss that's currently kicking my ass although I'm three levels higher than him. The jerk. 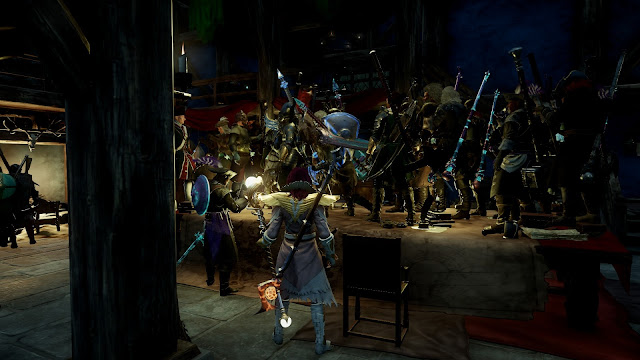